The Pigna Library happens to host events. There is a dedicated events block to get the readers to know about them.

When it came time to expand the “add” page beyond books, Ilya and I decided to kill the interface altogether.

To add an event, the librarian just writes what the event is. The plus sign received a beautiful frame to be on par with its friends—books. 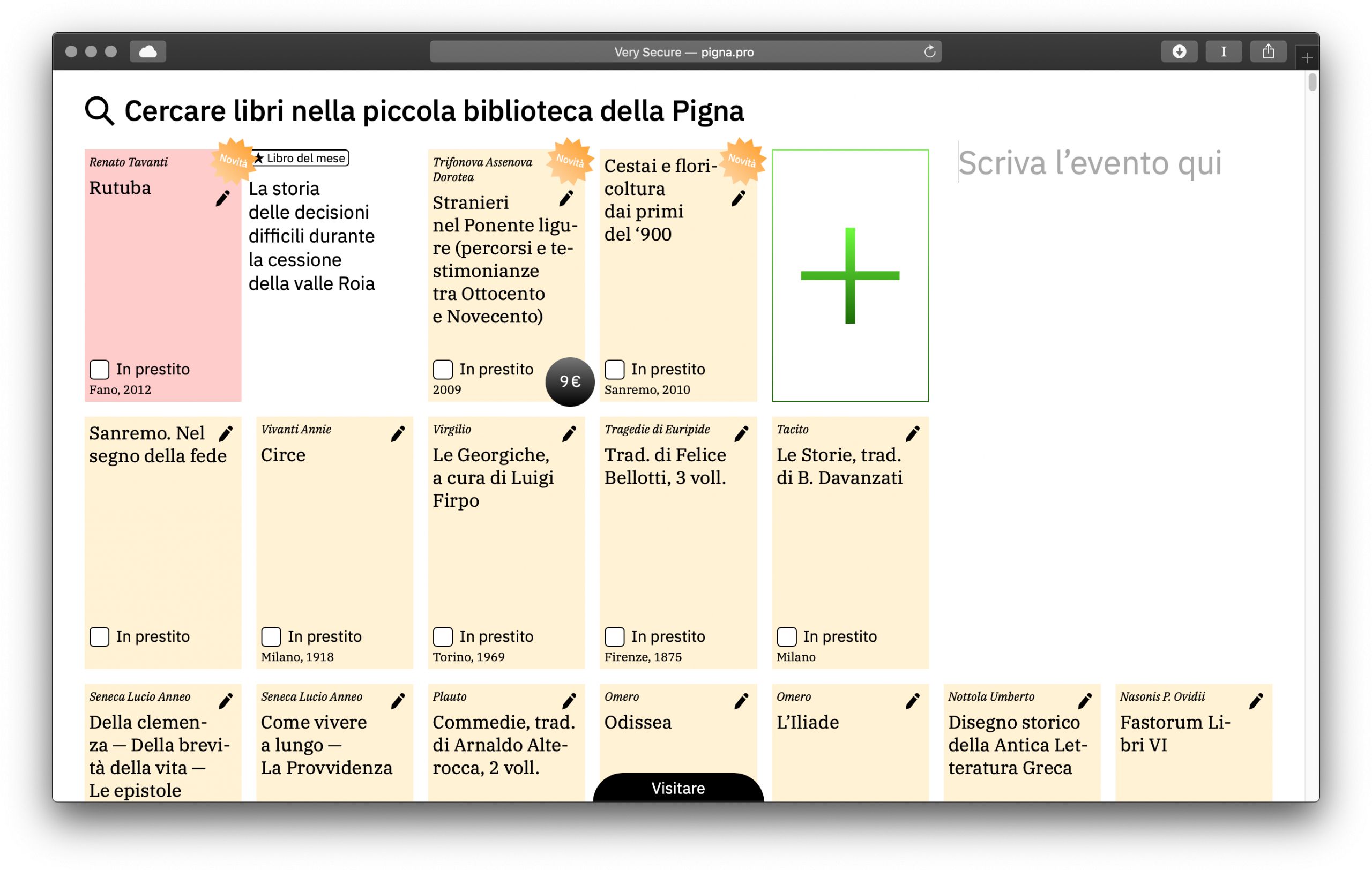 See also: The interface is evil

I started talking with the library’s director, Freddy Colt, in July. In August we agreed that I’d be a volunteer and help the library with some stuff. We agreed on what I would work on, but the necessary information and files were never sent due to shareholders other library administrators not agreeing.

One of those things was an online book catalogue. When I was in Sanremo, I went to the library and nudged Freddy to give me the book catalogue. Once I received it, I talked to a friend of mine, Ilya Sidorchik, a master of library catalogue and database projects. It became his term paper (project).

This was my first sketch: 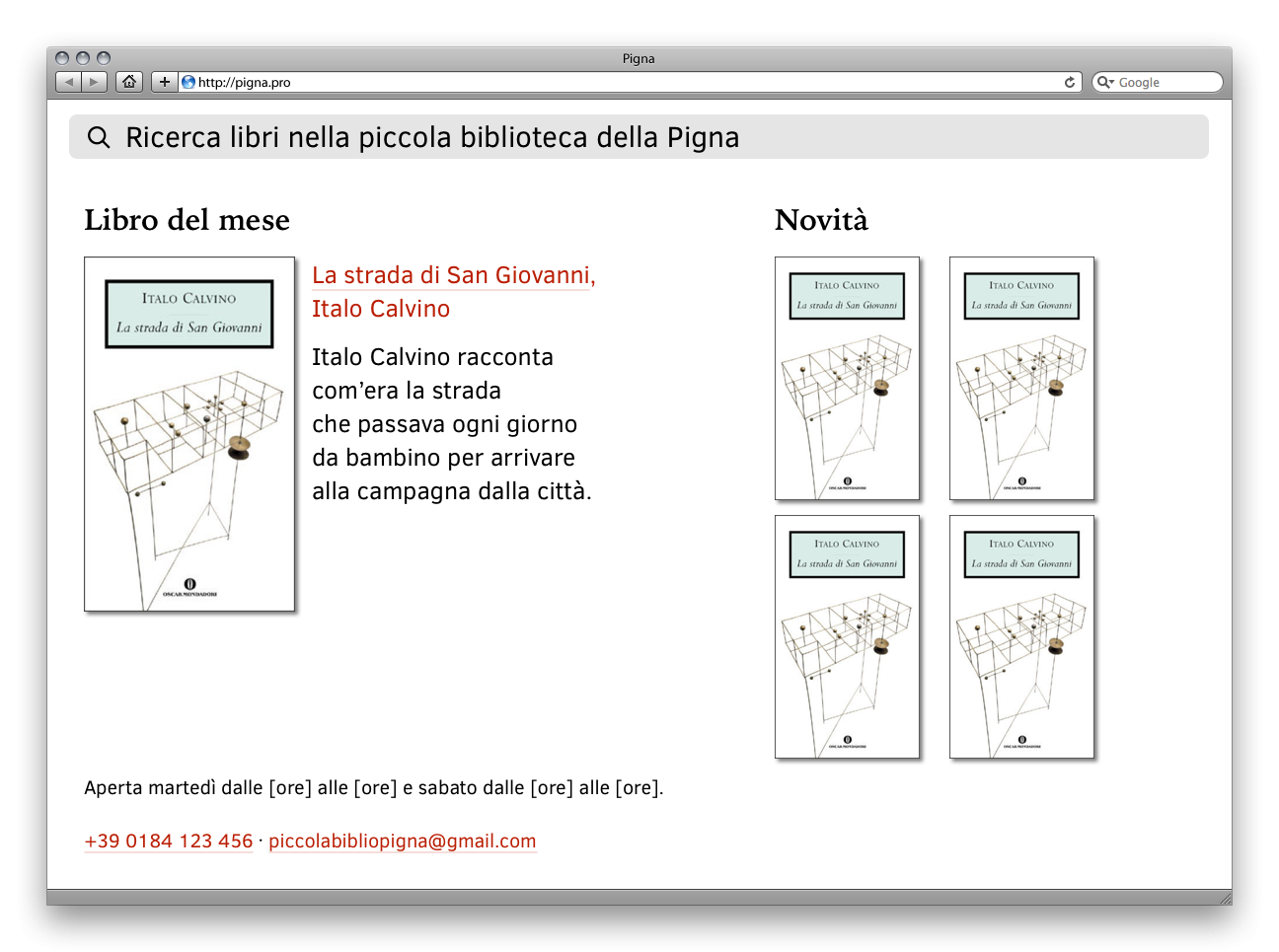 Then I improved it a bit: 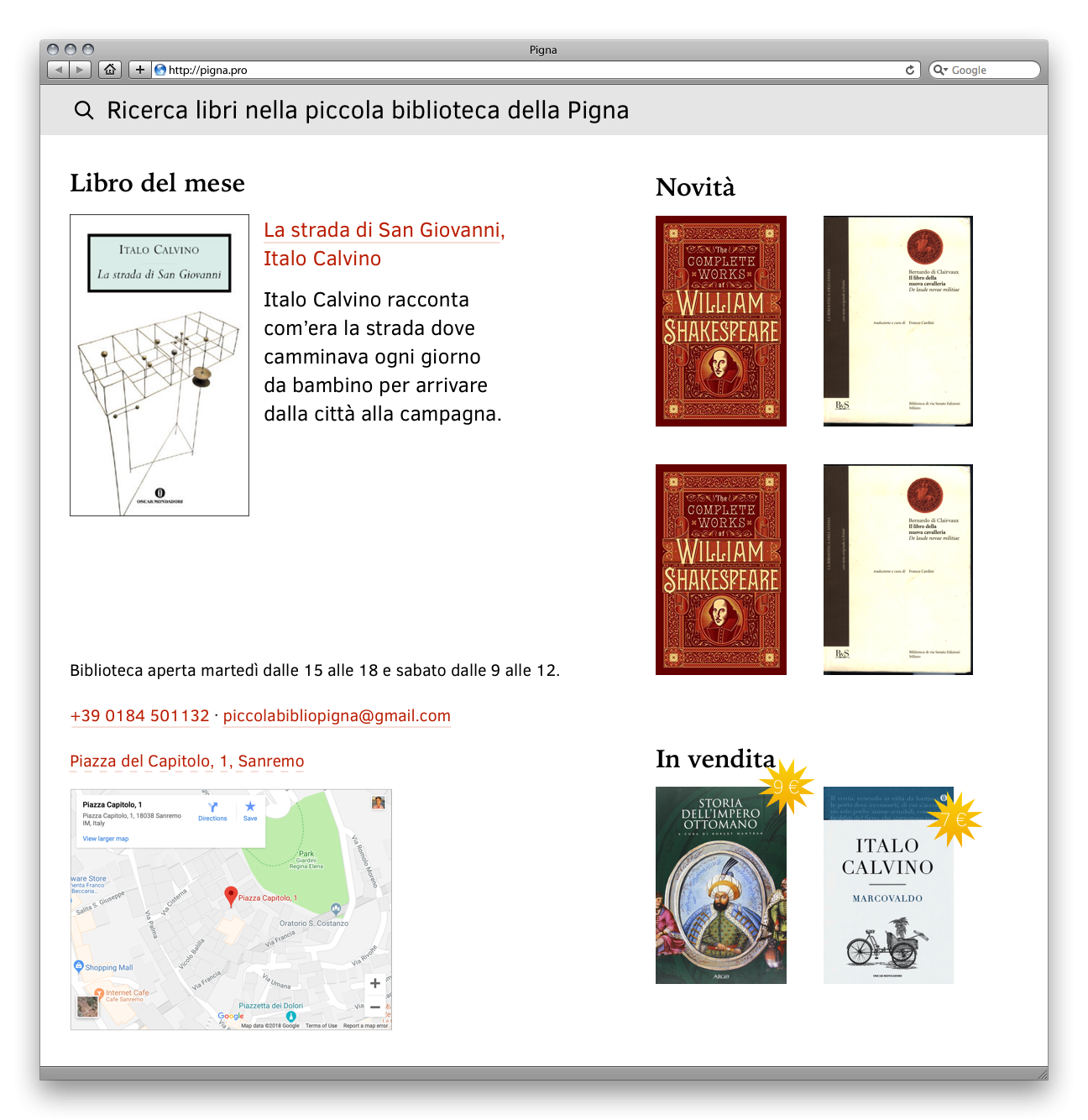 Ilya started talking to me philosophically about “building a castle” and the Italians that built the Kremlin. Food, wine, and the sun are also part of the conversation, because they are things that excite Italians.

He brings up an idea on how to make the website’s aesthetics look more captivating: 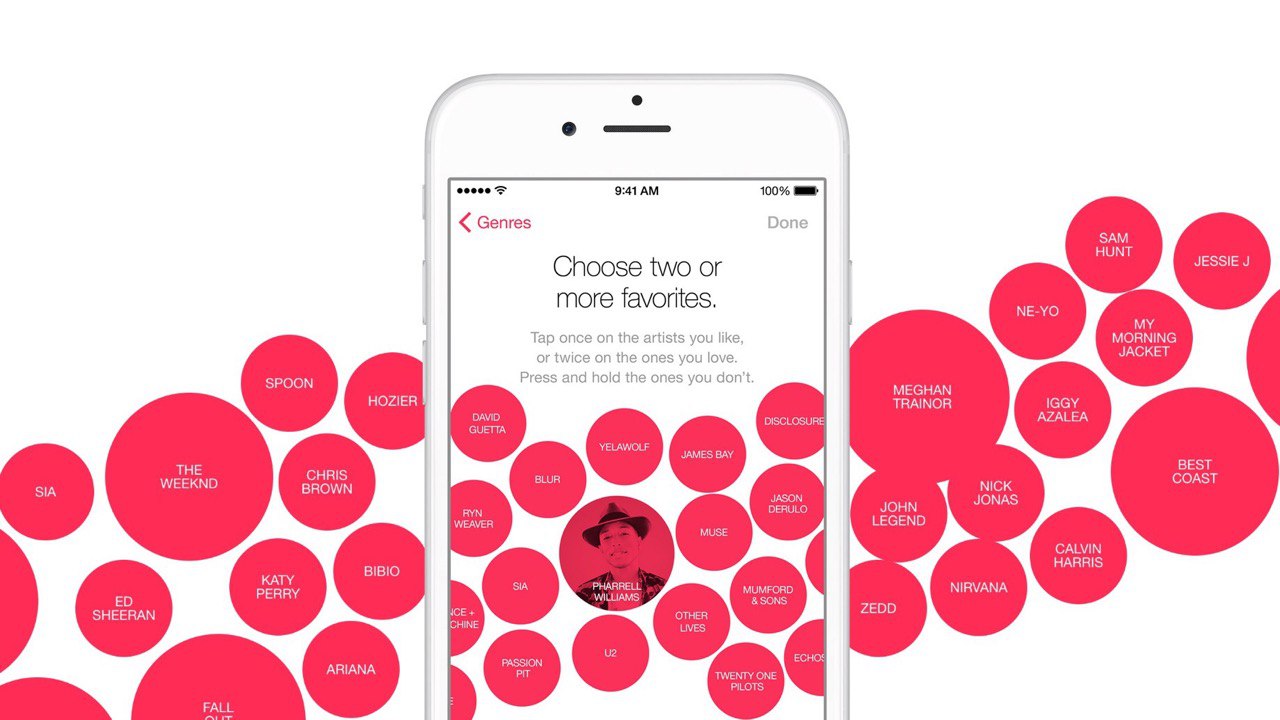 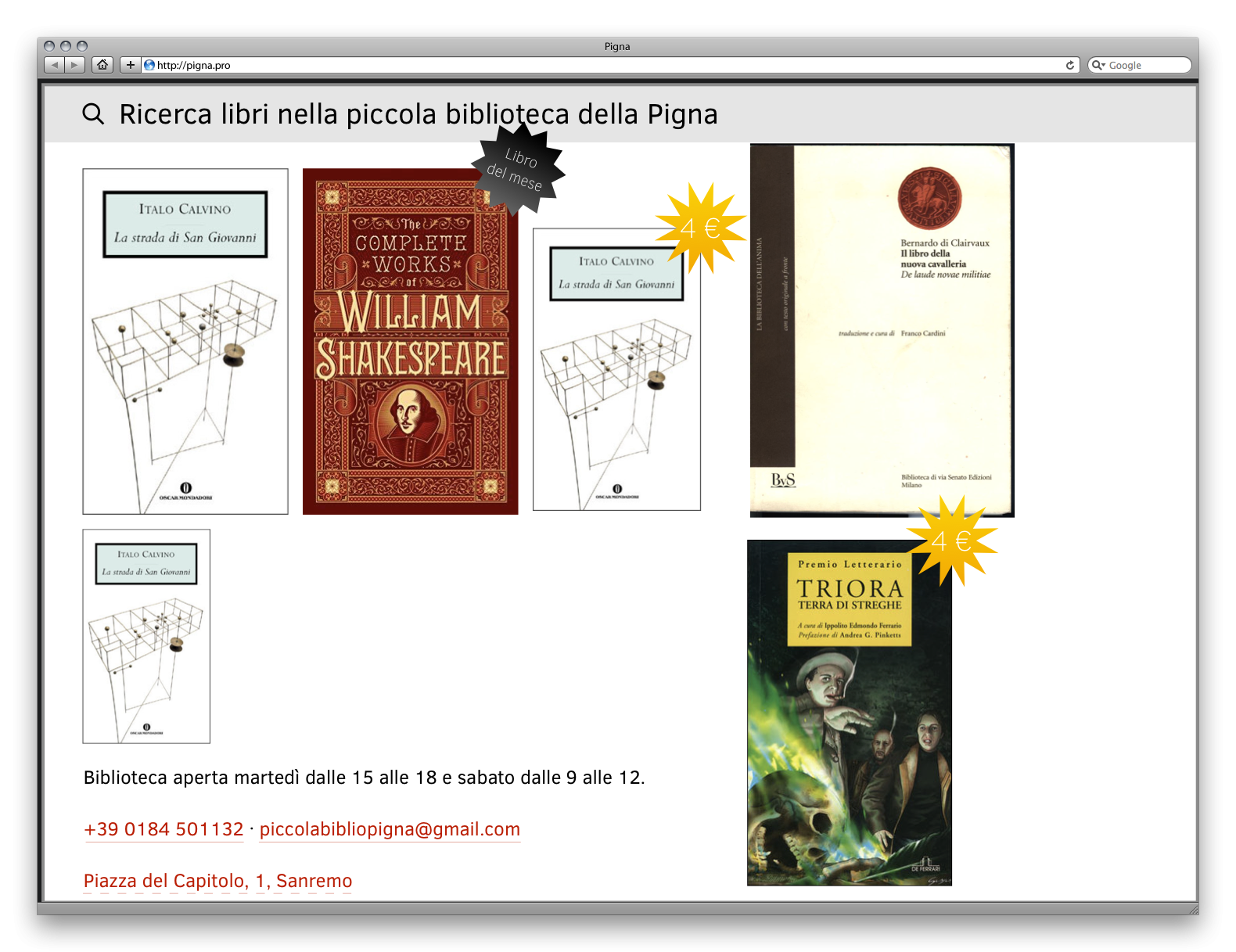 Ilya responded: “Robert, I think you’re still restricting yourself. There’s no need for that.” 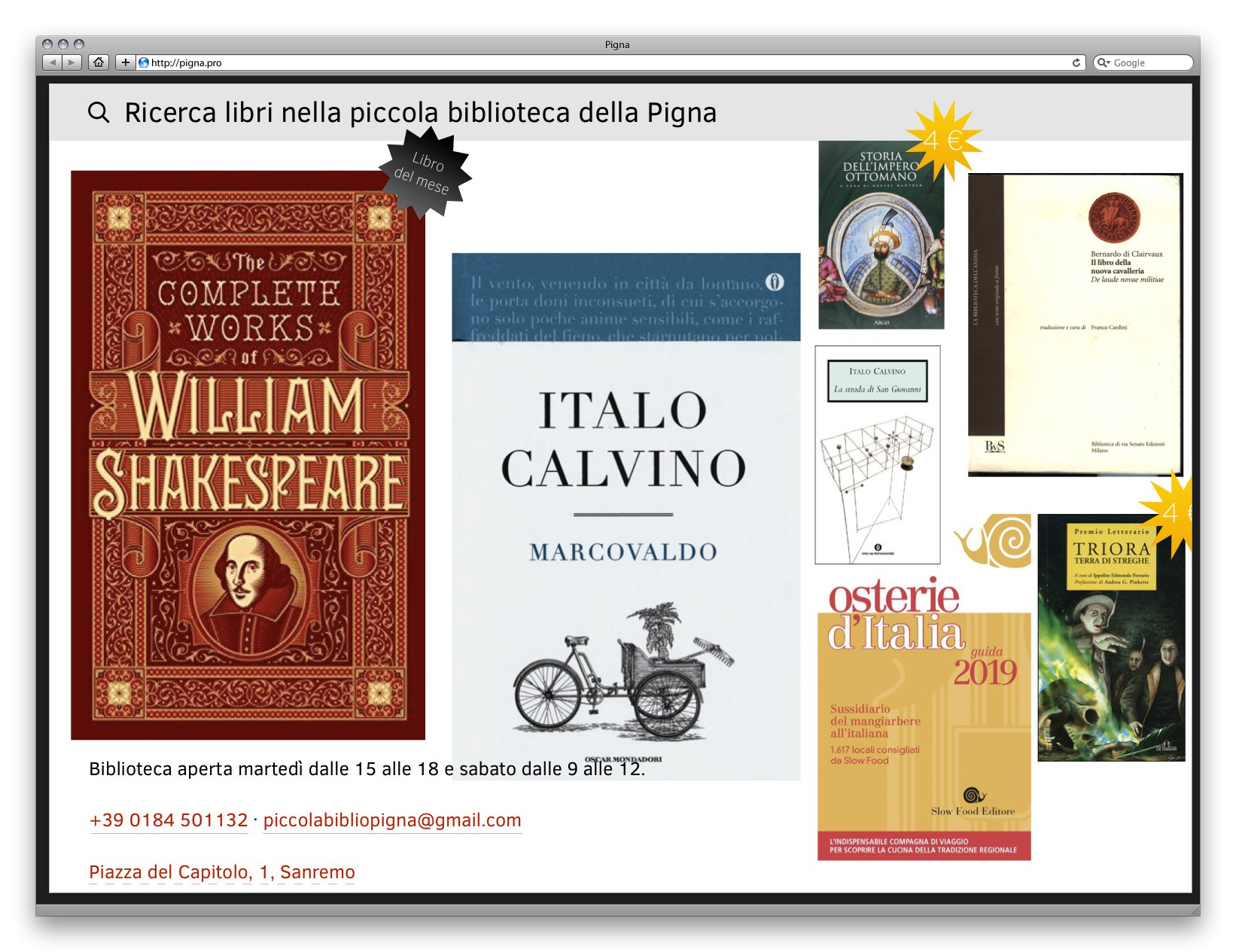 Since I was making six different versions, I saw that the 2560 px version could also use an upgrade:

Another idea came up: 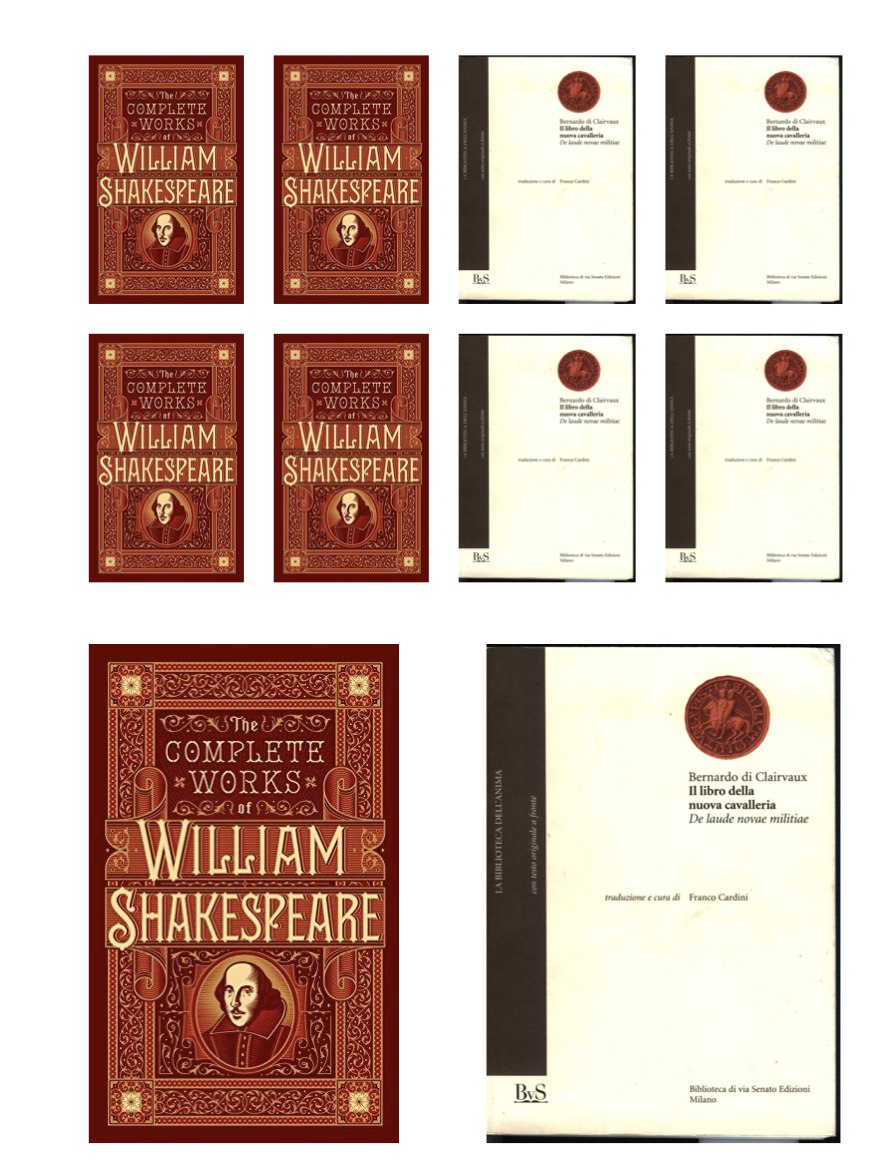 We started talking about the details and how putting actual book covers on the home page is close to impossible: the library has rare books the covers of which are not readily available. He also tells me the five steps I should follow to make the website better.

Working on this project also reminded me about how long Italian words usually are.

I started from scratch. 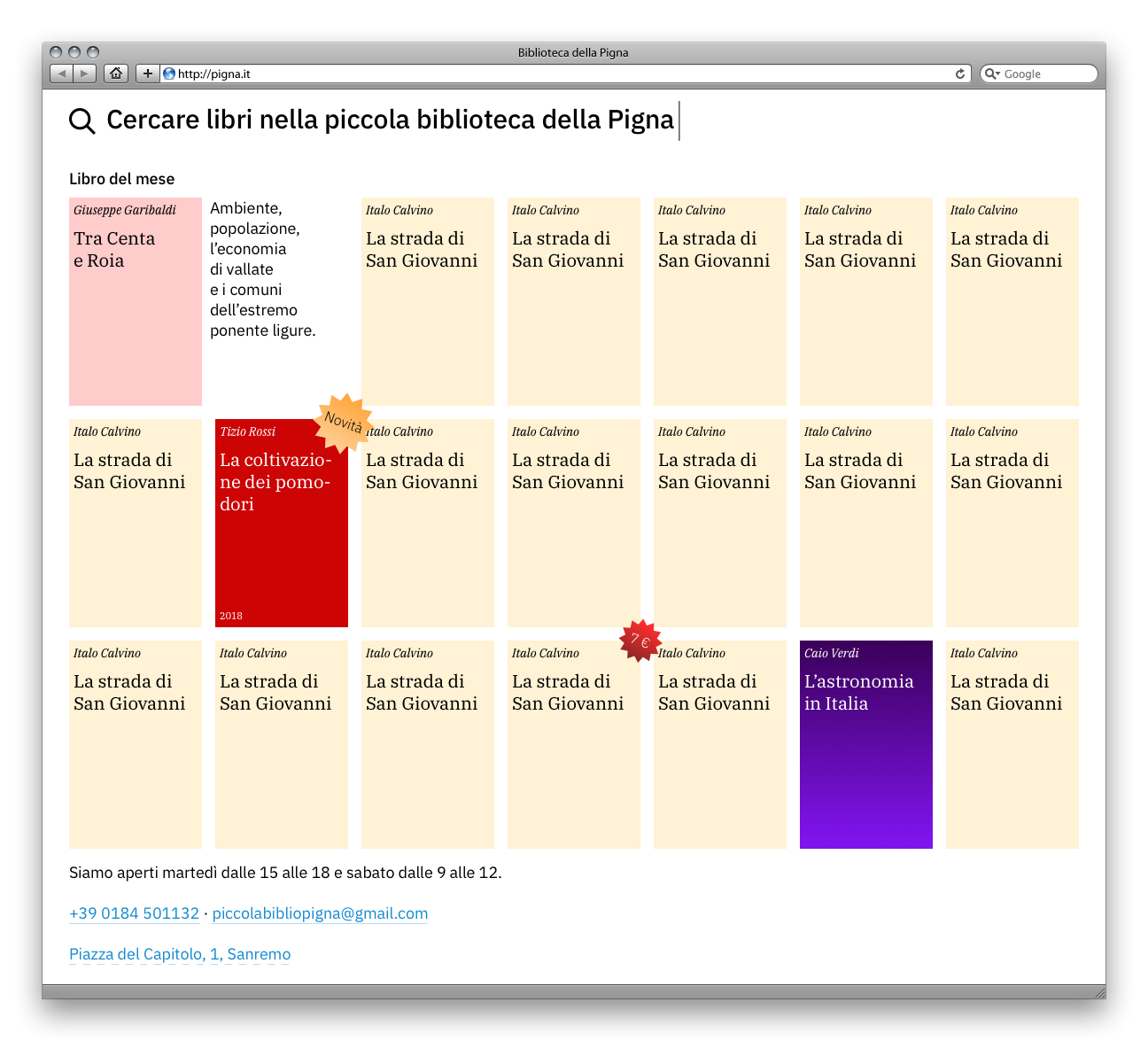 I added support for adding the library’s events in the top-right corner: 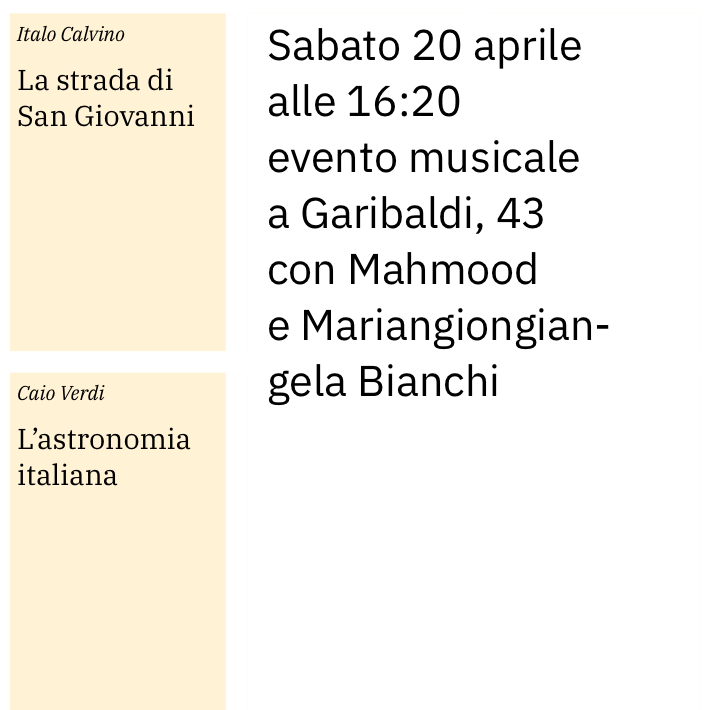 I fine-tuned the details with nine intermediate mockups. My final mockup: 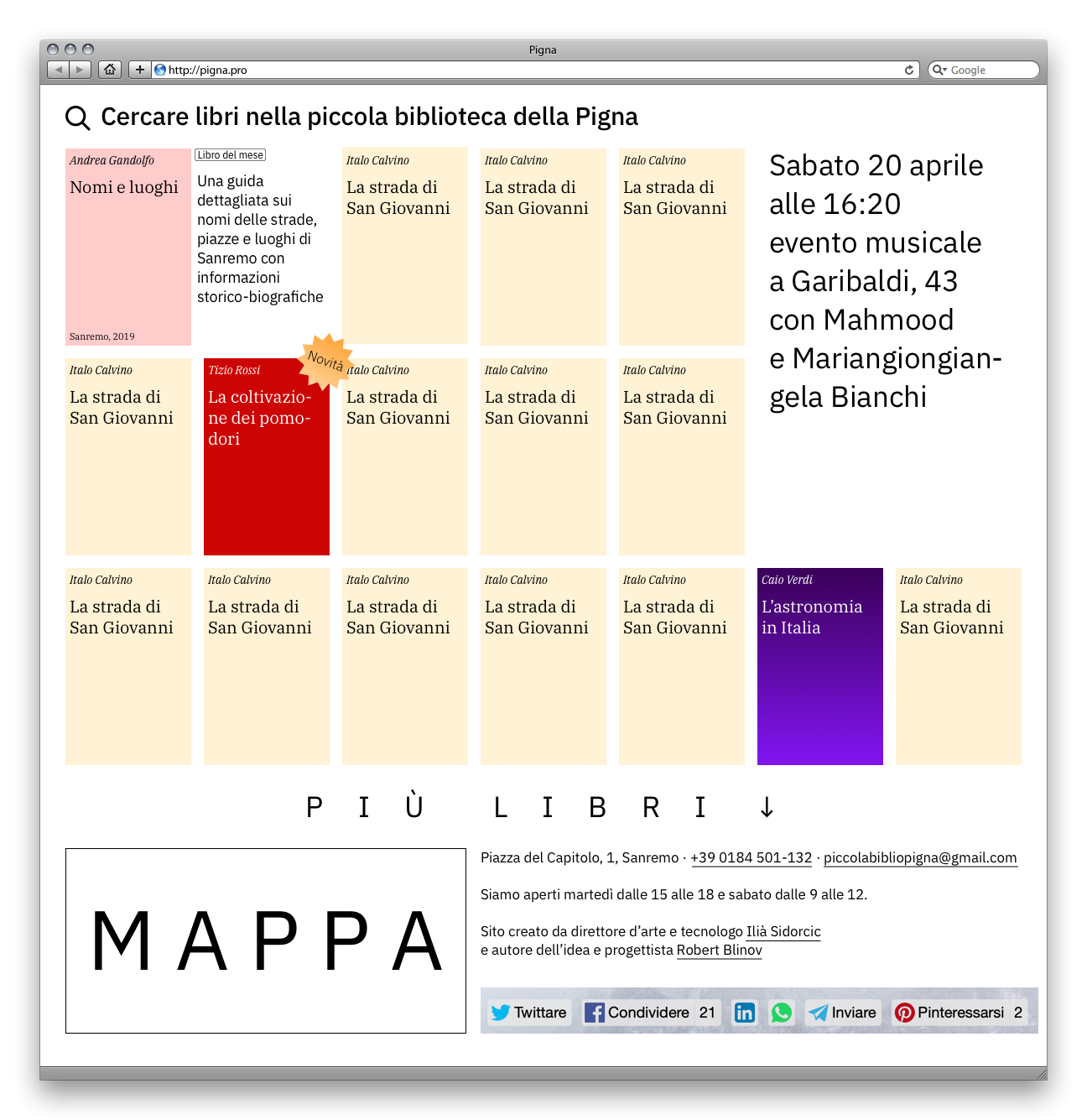 I was in parallel studying code, which meant I solved the first & last name crisis we had:

The book adding page looks like this. It is meant to be identical to book editing, because editing is the same thing as adding but with info already filled in. 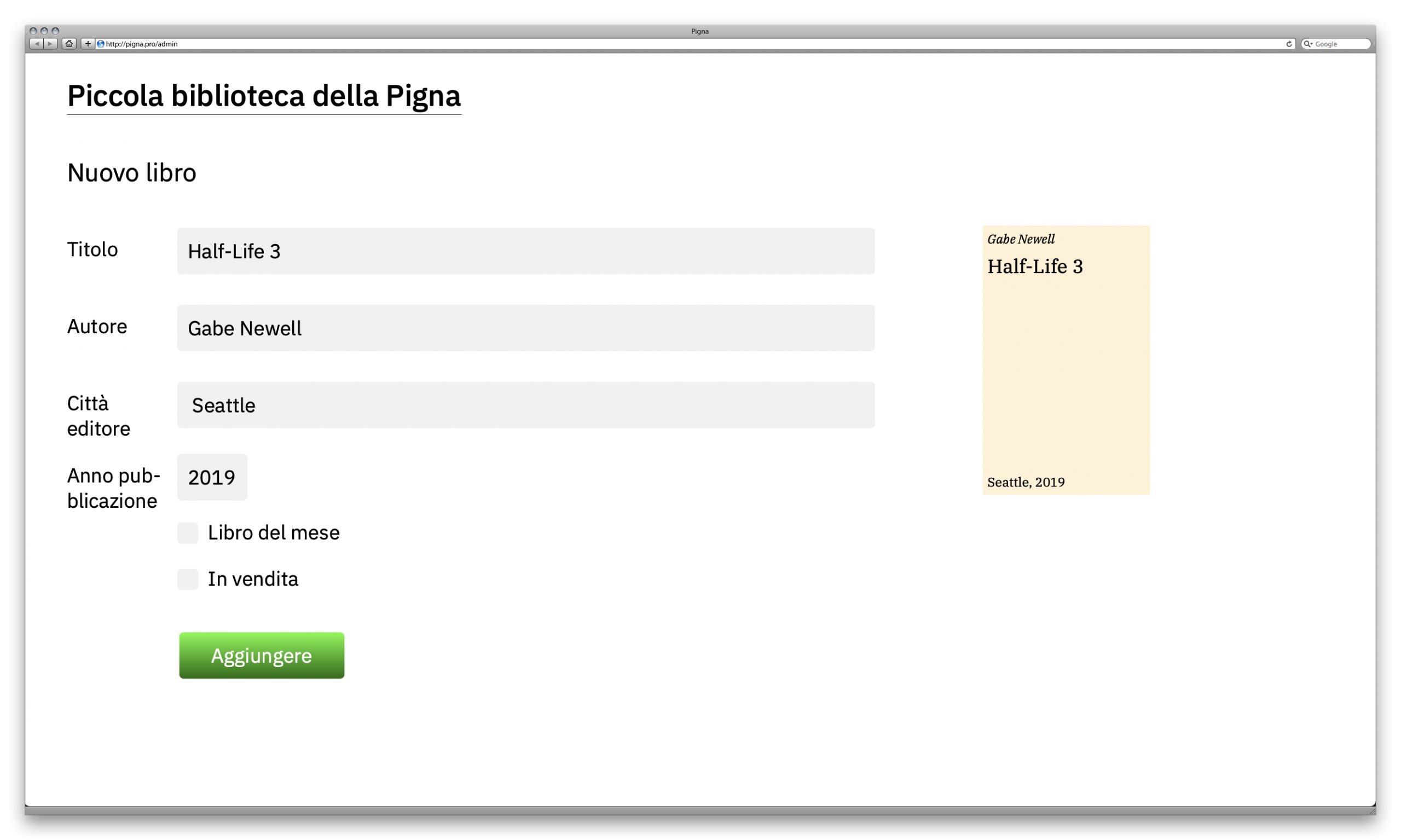 Ilya then worked hard to make the website come to life.

I came to Italy, met Freddy and gave him the keys. 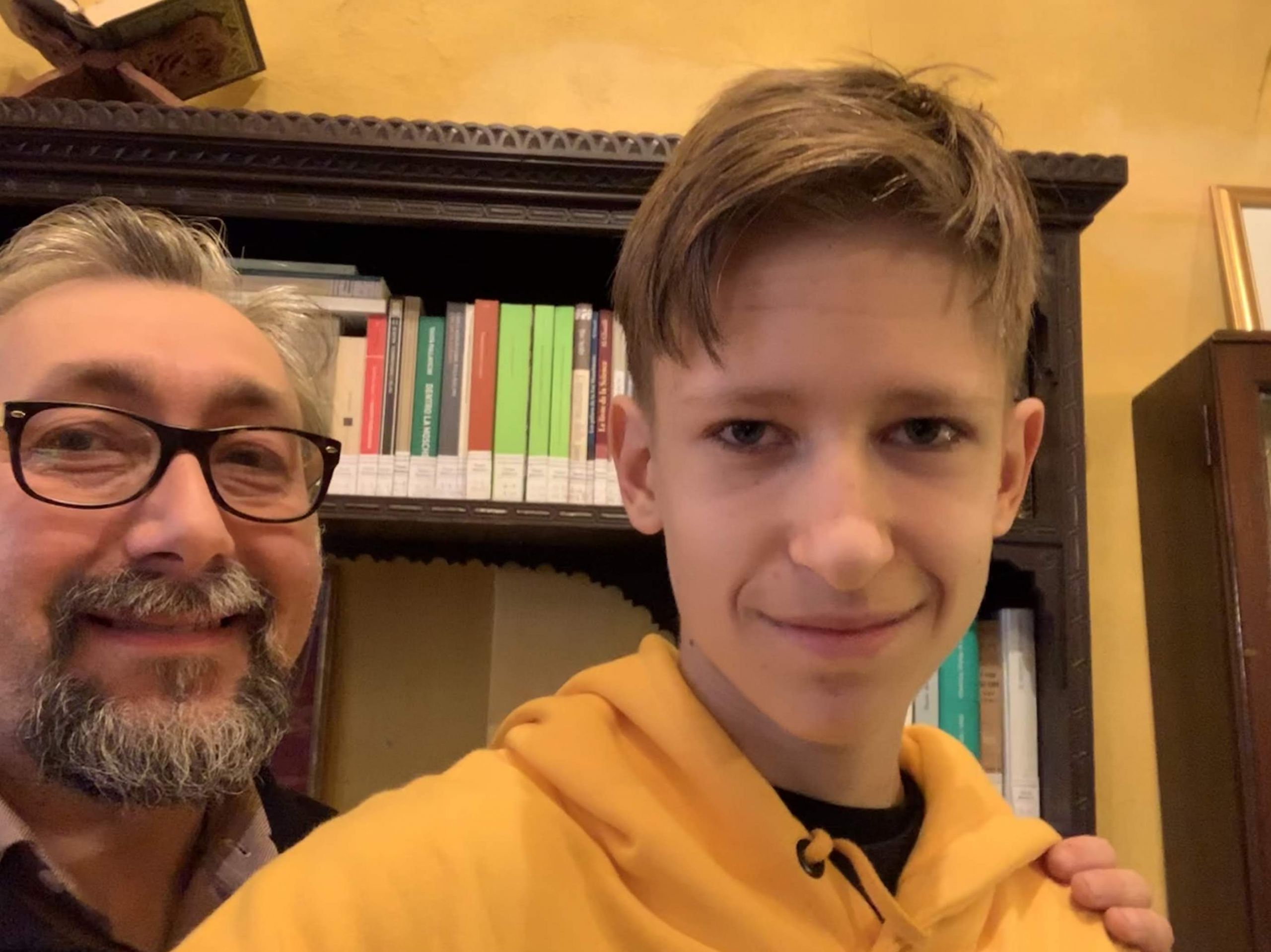